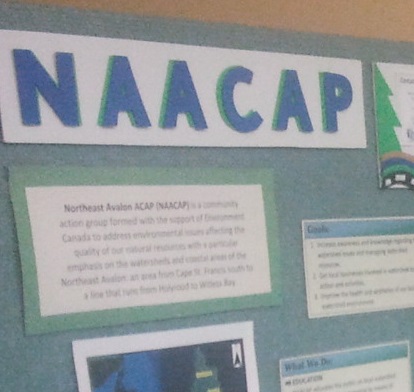 This Sunday, September 29th is World Rivers Day! Come celebrate with NAACAP and The Rotary Club of Waterford Valley at an afternoon event that will be both fun and interesting.  Come see our NAACAP display and enjoy a day celebrating the Waterford River – an historic local river stretching through three different Northeast Avalon municipalities.  We will be at “The Lodge”, located next to the main entrance to Bowring Park from 2-4pm.

Members of the Waterford Valley Rotary Club will walk the river from its headwaters in Paradise   and from its mouth at the St John’s harbour so as to come together at “The Lodge” at 3pm.

The Rotarians will be carrying water samples from both ends of the river as a gesture to highlight the need to understand the changes that are occurring in the quality of the water as it takes its course through the three communities. At the Lodge there will be displays, exhibitions, and informational material specifically related to the Waterford River System as well as education material on the importance of rivers generally and information on the World Rivers Day movement.

World Rivers Day History
Thirty years ago, a small group of British Columbians got together to pick up garbage from the Thompson River. It was the genesis for BC Rivers Day, which launched a movement that now attracts millions of people to thousands of events happening throughout the world in celebration of rivers.

The founder of BC and World Rivers Day, Mark Angelo, an avid fly fisherman and paddler had no idea his river cleanup on the Thompson would become a world event.

The BC government formally declared the last Sunday of September as Rivers Day in 1980, and it has snowballed from there. Global participation was formalized in 2005, when the United Nations launched the Water for Life Decade to help create a greater awareness of the need to better care for the world’s water resources.   A World Rivers Day event was seen by agencies of the UN as a good fit for the aims of the Water for Life Decade and so BC Rivers day became World Rivers Day.

In its first year World Rivers Day was celebrated across dozens of countries.  Since then, the event has continued to grow. In 2012, several million people across more than 60 countries participated in events celebrating the many values of our waterways.

The Waterford River
The Waterford River is an urban river which flows some 15 kms from its headwaters in Paradise, through Mount Pearl and the west end of St. John’s before emptying into the harbour. It is a major component of the attraction of Bowring Park where it is joined by its main tributary South Brook, a 6km long river which originates in the marshes behind the Southlands development. The three urban centres through which the Waterford River flows, Paradise, Mount Pearl,- and St, John’s, are three of the largest and fastest growing population centres in the province and that places unprecedented stress on the river system.

We hope to see you on Sunday. Come out and bring the kids!