Larch are trees of the genus Larix of the Pinaceae (Pine) family. There are 10-12 species in total, three of which exist in Canada. These trees are unique in that they are the only Canadian deciduous conifers, meaning they look like evergreens but lose their needles in the fall.

While several species of larch have been introduced to Newfoundland, including european (L. decidua) and Japanese (L. kaempferi) larch, our native species and the species found down in Lundrigan’s Marsh are Tamaracks (L. laricina). They live in cold, wet areas, often preferring poorly draining sites. They tolerate an incredible range of climatic and soil conditions and have a native distribution that spans from Alaska to Newfoundland and down to Indiana, but they like it best in cool, wet, organic-rich soils (Johnston, 1990) and so they do just fine down in a place like Lundrigan’s Marsh. 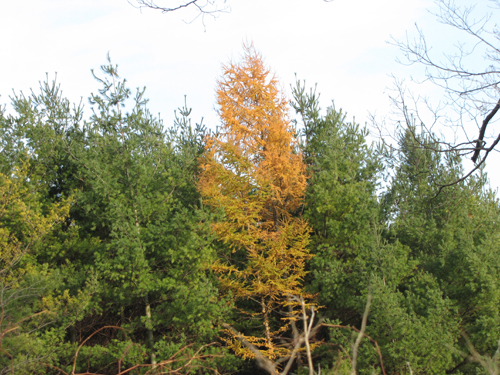 Tamarack in the fall are a welcome and familiar sight. Photo by Chris Earley.

Tamarack were among the first tree species to recolonise the island of Newfoundland after the last ice-age along with their commonly associated forest species, spruce (Picea sp.), balsam fir (A. balsamea), and pine (Pinus sp.) around 10,000 years ago (Macpherson, 1995; Jackson et al, 1997), when they likely blew across the Cabot Strait. Since their northward march following the recession of the continental ice sheets, tamarack have become one of the most important forest canopy tree species in the boreal forest, often alongside spruce and fir species in mid- to late-successional forests (Brown, 1982).

Their place as an important forest species that is able to thrive under a wide range of settings means they also associate with a variety of understorey species as well. Some of the species that can be found under a tamarack canopy in Newfoundland include bog birch (Betula glandulosa), swamp birch (Betula nana), speckled alder (Alnus incana ssp. rugosa), willows (Salix sp.), and red-osier dogwood (Cornus serica). These trees therefore provide important ecosystem functions in their commensalistic relationship (one species benefits, the other is not affected) with other species, overall improving the ecosystems in which they are found.

One final fun-fact about tamarack: these hardy forest-forming organisms are the official trees of the Northwest Territories! Can you recall our provincial tree here in Newfoundland and Labrador? (Hint: it’s a close friend of tamarack).

Let's take a moment to appreciate our oceans and coastal areas today on #worldoceanday pic.twitter.com/KsYp…