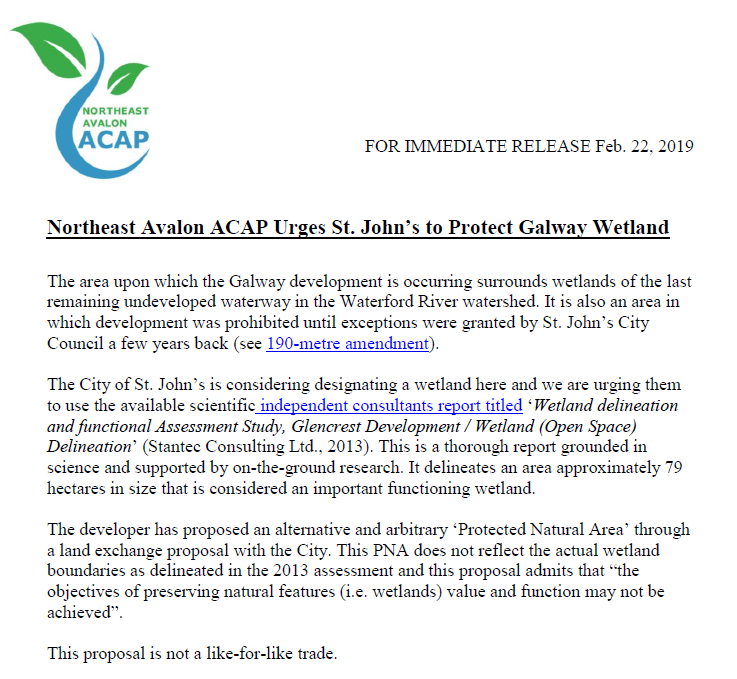 St. John’s City Council is expected to make a decision on how the wetland within the new Galway development will be delineated soon. The choice before Council appears to be between two delineation studies, carried out in Galway in 2013 and 2014. The first study was thorough, scientific, and in-depth, resulting in a detailed delineation of its full extent. The second resulted in a ‘Protected Natural Area’, which is supported by little scientific evidence and carves out large portions of the wetland in order to fit a development plan rather than a functional wetland system.

The wetlands in the Galway development area were previously protected due to development restrictions above the 190 m contour line. In exposing this wetland to development by amending that restriction, the City now has a duty to protect this wetland, as it does others within the municipal boundary. This wetland, at the headwaters of South Brook, represents the last remaining undeveloped reach of the Waterford River watershed. NAACAP hopes the City will make the right decision and protects the integrity of this wetland for both its value as a piece of green infrastructure serving the City, and its inherent value as habitat.